All-in-One Holiday Bundt Cake and a Give Away 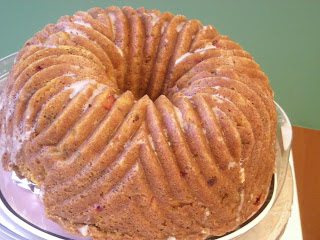 Britin of The Nitty Britty selected this super cake. The recipe is on Britin's blog.

Nice and easy to make and what a divine aroma coming from the kitchen! I followed the recipe exactly except for the oven temp. - my bundt pan was one of those Kaiser or Nordicware dark-colored pans, so I baked at 325 degrees F instead of 350. I have learned that the darker pans conduct heat more quickly so hence the need to bake about 25 degrees lower than the recipe states.

Umm! I've just had a teeny piece of bundt cake that fell off as I was setting it up for its maple syrup glaze. It's a perfect cake for Thanksgiving, with its warm spices and tangy cranberries. 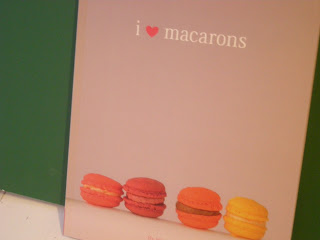 I'm also giving away a delightful little book: i heart macarons by Hisako Ogita. The first edition in English has just been published. I ended up with two copies, due to impatience with the Post Office and running to get another copy from Barnes and Noble. So if you just leave a comment on todays post I'll do the random number thing (or put the numbers in a hat!) next week, in time to announce the winner in my next TWD post.
Posted by Heather at 4:56 PM