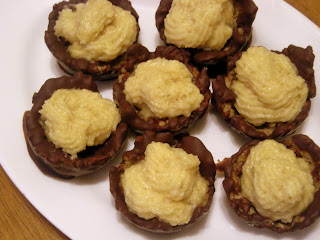 The April 2011 Daring Bakers’ challenge was hosted by Evelyne of the blog Cheap Ethnic Eatz. Evelyne chose to challenge everyone to make a maple mousse in an edible container. Prizes are being awarded to the most creative edible container and filling, so vote on your favorite from April 27th to May 27th at http://thedaringkitchen.com/!


Here I go, limping along, posting late as usual and doing only the basics for the challenge. However, it's done, thank goodness! I have been looking at the superbly artistic entries on the Daring Bakers website - there is a feast beautifully made, top level desserts. I can learn a lot from browsing through them and experimenting with some of the ideas.

I made half portions of the recipe for the nut cups and the mousse and used Ghirardelli bittersweet chocolate chips for the dipping chocolate and pecans for the nut base. The chocolate was an ideal match - anything sweeter would not have tasted good. I also loved the nut cups and formed them in a mini cupcake pan. I got 10 cups out of the recipe; the ones not on the plate have been gobbled up by the baker. I did not care for the Maple mousse so much as I thought it was a bit too sweet and only faintly tasted of maple syrup. I will definitely try the cups again, maybe even with finely ground nuts to give a more even shell. Here is the recipe for this fun challenge:

Nut Bowls:
Ingredients:• 1 1/2 cups crushed nuts of your choice such as almonds, hazelnuts or walnuts• 1 egg, beaten, at room temperature• 2 tbsp sugar• 1/2 cup dark chocolate pieces
Directions:1. Use a food processor or a zip-lock back with a rolling pin to crush your nuts if whole, use about 1 cup of whole nuts to get 3/4 cups crushed. You want it somewhat coarse.2. In a bowl mix the nuts with the beaten egg and the sugar.3. Take 6 small ½ cup capacity Pyrex cups or a similar container and line the inside with aluminum foil. Spread ¼ cup of the mixture in the bowl, all the way up to the sides making sure you have a thin and even clean layer all around.4. Bake at 350 degrees F/175 degrees C. until the nuts are golden and fragrant (about 15 minutes). Let cool completely before unmolding.5. Melt chocolate (either in the microwave or over a double boiler). Dip the rims of the cooled nut bowls in the chocolate. Place in the freezer for at least 15 minutes or until the chocolate has hardened and is set.

Maple Mousse:
Ingredients:• 1 cup (240 ml/ 8 fluid oz.) pure maple syrup (not maple-flavoured syrup)• 4 large egg yolks• 1 package (7g/1 tbsp.) unflavoured gelatine• 1 1/2 cups (360 ml. g/12 fluid oz) whipping cream (35% fat content)
Directions:1. Bring maple syrup to a boil then remove from heat.2. In a large bowl, whisk egg yolks and pour a little bit of the maple syrup in while whisking (this is to temper your egg yolks so they don’t curdle).3. Add warmed egg yolks to hot maple syrup until well mixed.4. Measure 1/4 cup of whipping cream in a bowl and sprinkle it with the gelatine. Let it rest for 5 minutes. Place the bowl in a microwave for 45 seconds (microwave for 10 seconds at a time and check it in between) or place the bowl in a pan of barely simmering water, stir to ensure the gelatine has completely dissolved.5. Whisk the gelatine/whipping cream mixture into the maple syrup mixture and set aside.6. Whisk occasionally for approximately an hour or until the mixture has the consistency of an unbeaten raw egg white.7. Whip the remaining cream. Stir 1/4 of the whipped cream into the maple syrup mixture. Fold in the remaining cream and refrigerate for at least an hour.8. Remove from the fridge and divide equally among your edible containers.

Now it's onward to May - only one night to go before I know what it is. 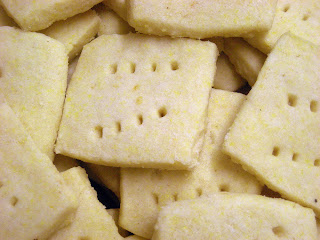 We enjoyed these neat little shortbread cookies. They have a crunchy, crispy consistency as a good shortbread should and the amount of butter is just right.


For myself I don't think I would use cornmeal again and would maybe cut out some of the lemon rind as the lemon flavor is quite strong. A nice, buttery plain shortbread does it for me.


I just love Dorie's ziploc bag method of shaping the dough and letting it harden in the fridge for hours - it makes the dough so easy to shape and cut. The recipe for the shortbread cookies is
here .
Posted by Heather at 3:42 PM 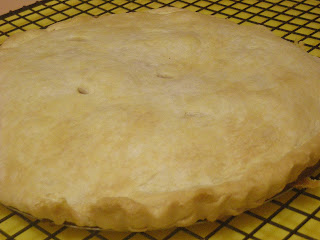 I can't wait to try some of this tart tomorrow; it's really quite different from other apple tarts or pies - the filling does not have any over juicy, runny liquid in it and the nuts give it a nice crunch.

The recipe can be found on Jeannette's blog, The Whimsical Cupcake. Thank you, Jeanette, I think this is going to be a winner.

After the tart - fabulous! five stars! 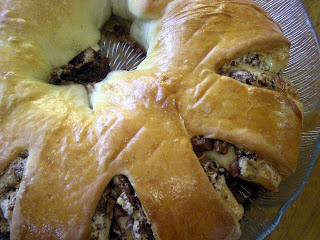 The March 2011 Daring Baker’s Challenge was hosted by Ria of Ria’s Collection and Jamie of Life’s a Feast. Ria and Jamie challenged The Daring Bakers to bake a yeasted Meringue Coffee Cake.

A whole week late! I rushed to get this challenge done on the 27th, Reveal Date, and made a dreadful mess. After that I was intending to pass the March challenge by until I spent some time looking at the lovely creations of fellow DB'ers. Surely it was worth another shot. I think it was quite a difficult cake to make, but one that would get easier once the techniques were mastered. Now that I have the cake in some sort of reasonable shape, I feel courageous about trying something similar. The recipe is basically for a rich brioche-type dough, filled with a layer of whipped meringue, which is then covered in cinnamon sugar, nuts, and chocolate chips. The last step is to roll the dough, Swiss roll style, and create a wreath shape. The recipe makes two cakes.

Directions for the Dough: In a large mixing bowl, combine 1-1/2 cups of the flour, the sugar, salt and yeast. In a saucepan, combine the milk, water and butter and heat over medium heat until warm and the butter is just melted. Add 1/2 teasp. ground cardamom. Let sit for 10 minutes so cardamom flavor can steep. With an electric mixture (hand mixer is fine) on low speed, gradually add the warm liquid to the flour/yeast mixture, beating until well blended. Increase mixer speed to medium and beat 2 minutes. Add the eggs and 1 cup of flour and beat for 2 more minutes. Using a wooden spoon, stir in most of the rest of the flour so that it makes a dough that holds together. Turn dough out onto a floured board or silpat and knead for 10 minutes, using what is left of the flour (about 1/4 cup) for the work surface. Add extra flour as needed. Place the kneaded dough into a lightly greased bowl, turning to coat all sides. Cover the bowl with plastic wrap and a kitchen towel and let sit until double in bulk, 60 plus minutes. Prepare the filling in a small bowl: Combine the sugar and cinnamon and set aside in a small bowl; chop up chocolate and chop up toasted pecans. Set aside.

Once the dough has doubled, make the meringue. In a clean metal mixing bowl beat the egg whites with the salt, first on low speed for 30 seconds, then increase to high and continue beating until foamy and opaque. Add the vanilla then start adding the sugar, one Tbs. at a time while beating, until meringue is very stiff and glossy and forms stiff peaks.

Assemble the Cakes :Line two cookie sheets with parchment paper. Very important - grease and flour the paper. Punch down the dough and divide in half. On a lightly floured surface, working with one piece at a time (keep the other half wrapped in plastic), roll out the dough into a 20x10 inch rectangle. Spread half of the meringue evenly over the rectangle up to about one, even 1-1/2 inches from the sides. Sprinkle half of the cinnamon sugar, then the chopped nuts, then the chocolate pieces onto the meringue covered rectangle. Roll up the dough jellyroll style, from the long side. Pinch the seam closed to seal. Very carefully transfer the filled log to one of the lined, greased cookie sheets, seam side down. Bring the ends of the log around and seal the ends together, forming a ring, tucking one end into the other and pinching to seal. Using kitchen scissors make cuts along the outside edge at 1-inch intervals. Make them as shallow or deep as desired but don't be afraid to cut deep into the ring. Repeat with the remaining dough, meringue and fillings. Cover the 2 coffee cakes with plastic wrap and allow them to rise again for about 60 minutes.

Preheat oven to 350 degrees F. Brush the tops of the coffee cakes with the egg wash. Bake in the preheated oven for 25 to 30 minutes until risen and golden brown. The dough should sound hollow when tapped. Remove from the oven and slide the parchment paper/cake off the hot cookie sheets onto the table. Very carefully loosen the coffee cakes from the paper with a spatula and carefully slide the cakes off onto cooling racks. The cakes tend to stick to the paper - it took me two cake lifters and a knife to get them off. (If it doesn't come off easily, can always turn the cake upside down when its cool and firm and just peel the sticky paper off.)
Posted by Heather at 1:55 PM