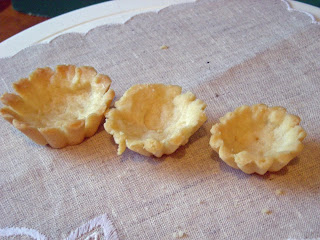 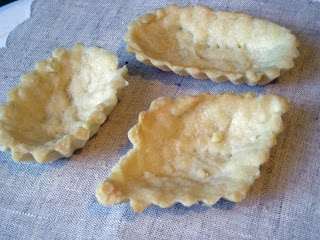 Here are the results of some much needed tartlet pastry practice. I usually use the tartlet pans with removable bases, but then they don't come in cute, tiny sizes or in a great variety of shapes. Now that I have discovered Dorie Greenspan's superb Pate Sucre recipe, I am determined to perfect the art of making mini tarts.

My first effort bombed as I couldn't get the pastry out of any of the cases - it all ended up in the sink. So on to Baking 911 and the Ask Sarah Forum. I learned the main technique for an easy tartlet release is to refrigerate (or freeze) them after they have baked and cooled. Then after about an hour or more, dip the bottom of each tartlet pan in freshly boiled water, just for a few seconds. Turn upside down on the sink top and they should release immediately - if they don't, just tap them a bit and the job is done.

1. Make Dorie's Pate Sucre and refrigerate as instructed in the recipe (recipe follows).*
2. Spray the tartlet tins with lots of Mazola Oil spray.
3. Cut off as much as needed of the pate sucre and put the rest back in the fridge.
4. Take pieces of pastry and press into the tins, using thumb and fingers. Make sure that the whole surface of each tin, including all the flutes, is completely covered with 1/8 inch of pastry. Remove any pastry that sticks up from the top edge of the tin.
5. Refrigerate again for at least 30 mins. This stops the pastry bases from puffing up in the oven and it allows for a nice even baking.
6. Place tartlet pans in a 350 degree oven on a baking try (I use a pizza pan - it's nice and light to manouvre) and bake pastry for about 11 minutes. The edges should be just a teeny bit brown in parts and the rest a creamy yellow.
7. Remove tartlets from oven and slide from tray onto the counter top. Let cool completely.
8. Place in refrigerator (or freezer)for at least an hour.
9. Fill shallow pan with boiling water. Remove pastry tins from refrigerator and
quickly dip base of each tartlet pan in the hot water, for just a few seconds.
10.Turn upside down on counter top - the pastry should release. If it doesn't, just give it a tap (or two) and the shells will come out looking rather pretty and adorable, ready for yummy fillings.

To make the dough: Put the flour, confectioners’ sugar and salt in the workbowl of a food processor and pulse a couple of times to combine. Scatter the pieces of butter over the dry ingredients and pulse until the butter is cut in coarsely – you’ll have pieces the size of oatmeal flakes and pea-size pieces and that’s just fine. Stir the egg, just to break it up, and add it a little at a time, pulsing after each addition. When the egg is in, process in long pulses – about 10 seconds each – until the dough, which will look granular soon after the egg is added, forms clumps and curds. Just before your reaches this clumpy stage, the sound of the machine working the dough will change – heads up. Turn the dough out onto a work surface.

If you want to press the dough into a tart pan, now is the time to do it.

If you want to chill the dough and roll it out later (doable, but fussier than pressing), gather the dough into a ball (you might have to use a little more pressure than you used to mix in dry bits, because you do want the ball to be just this side of cohesive), flatten it into a disk, wrap it well and chill it for at least 2 hours or for up to 1 day.

To make a press-in crust: Butter the tart pan and press the dough evenly along the bottom and up the sides of the pan. Don’t be stingy – you want a crust with a little heft because you want to be able to both taste and feel it. Also, don’t be too heavy-handed – you want to press the crust in so that the pieces cling to one another and knit together when baked, but you don’t want to press so hard that the crust loses its crumbly shortbreadish texture. Freeze the crust for at least 30 minutes, preferably longer, before baking.

To make a rolled-out crust: This dough is very soft – a combination of a substantial amount of butter and the use of confectioners’ sugar – so I find it is easier to roll it between wax paper or plastic wrap or, easiest of all, in a roll-out-your-dough slipcover. If you use the slipcover, flour it lightly. Roll the dough out evenly, turning the dough over frequently and lifting the wax paper or plastic wrap often, so that it doesn’t roll into the dough and form creases. If you’ve got time, slide the rolled out dough into the fridge to rest and firm for about 20 minutes before fitting the dough into the buttered tart pan. Trim the excess dough even with the edge of the pan. Freeze the crust for at least 30 minutes, preferably longer, before baking.

To partially bake the crust: Center a rack in the oven and preheat the oven to 375 degrees F. Butter the shiny side of a piece of aluminum foil and fit the foil tightly against the crust. Bake the crust 25 minutes, then carefully remove the foil. If the crust has puffed, press it down gently with the back of a spoon. Bake for another 3 to 5 minutes, then transfer the crust to a cooling rack; keep it in its pan.
Posted by Heather at 2:09 PM 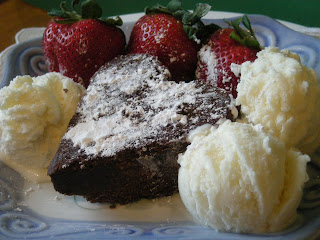 The Valentino Cake - mine was dry and tasted of heavy baking chocolate - good, expensive baking chocolate but not smooth and creamy. I am sure I overwhipped the egg whites and let it bake for too long. I decided to make the best of it so cut the Valentino's heart out. Now I have a neat looking upside-down chocky heart on a plate, with dollops of icecream and fresh strawberries. I'm not sure if I'll use this recipe again; I am not very fond of flourless cakes, but it was fun to try though.
The Icecream - delicious. I used Wendy's icecream recipe in my new Cuisinart Icecream Maker - it was a breeze to make and froze beautifully in my freezer after mixing. It was so fresh and natural. I can see all sorts of delicious icecreams coming out of that Cuisinart now. What a wonderful opportunity to buy an icecream maker.
Thank you Dharm and Wendy for this great challenge.
I'm posting the recipe for Wendy's icecream:

Wendy's Ice Cream RecipeVanilla Philadelphia Style Recipe
Preparation Time: 5 minutes
2 cups (473 ml) of half and half (1 cup of heavy cream and 1 cup of whole, full fat milk)1 cup (237 ml) heavy cream2/3 (128 grams) cup sugarDash of salt1 (12 grams) tablespoon of vanillaMix all ingredients together (we do this in a plastic pitcher and mix with an emulsifier hand blender-whisking works too).Refrigerate for 30 minutes or longerMix in your ice cream maker as directed.
Posted by Heather at 3:17 PM 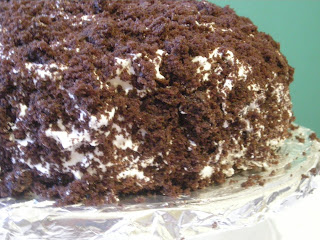 Am I finally into Blogger?! I have an a.k.a. now - "Sherry Trifle and Cats"- Blogger ruined my whole Presidents' Day weekend as it would not let me log in. Quite at my wits end, I switched my browser to Yahoo and registered my new baby. I know I must reach our TWD administrators to ask them to let me in with the new blog name.

Anyway, on to Dorie's Devils Food White-Out Cake:
A great cake to make - a little bit different because of the hot water added to it but it poured very nicely into two 8-inch pans and came out of the oven looking quite satiny. I was lucky it did not sink (that happened hopelessly with my Berry Surprise effort). The cakes are not very high, however, I'd say only just acceptably risen.
Oh the frosting! How tremendously exciting - it's beautiful just to watch it turn billowy once the syrup is added to the egg white. Thanks to the P&Q posts, I didn't panic when the candy thermometer stuck at 220 degrees for goodness know how long, and I managed to juggle the egg white with the cooking syrup. Now for the halving of the 2 cakes and I'm almost done.
My new torting method: I scooped up the smallest amount of frosting from the bowl, and, using a fine knitting needle, dabbed it from the frosting onto what looked like the half-height of each cake. Did this at 2 inch intervals until finishing the circle. Then I placed the cakes, one at a time, on my revolving cake stand and cut them very gingerly with a long bread knife through the dabs of frosting while I rotated the stand. It was easy! Next time I'll use this method again (could do it with soft butter, any kind of frosting, jam or whatever, as long as it leaves little spots of a contrasting color on the cake). It's so much nicer than the toothpick method.
Done! I think this is one of the loveliest cake recipes I have ever made. The crumb is soft, the chocolate rich, and the frosting divine. Can't wait to take it in to the office tomorrow.
Thank you so much for this gorgeous pick, Stephanie of "Confessions of a City Eater".
Posted by Heather at 10:48 AM