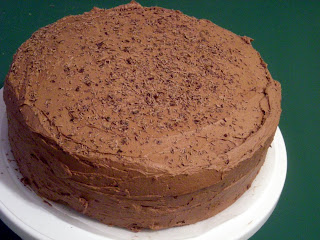 Lovely, just lovely! It's been a while since I have made a regular chocky cake with cocoa powder; I also used the 4 ounces of melted chocolate but that was optional. It's almost retro in fact, with a nice thick batter - very much like the sort of cake my mother used to make.

It took about 35 mins. to bake, not 26-30 as stated in the recipe; I sometimes find that Dorie's recipes are rather short on baking time. I used the chocolate buttercream frosting from Rose Levy Berenbaum's Cake Bible (recipe is in my December Opera Cake post). There was a lot of frosting left over from the Opera Cake effort, so here was a chance to use up this very expensive and very delicious buttercream.

Most important - this cake is the TWD'ers pick for our second anniversary. (The other choice was Tarte Tatin but I was in a chocolate cake state of mind.) I came onto the TWD scene quite early on, with the Snickery Squares recipe, and have been having a ball ever since. Thank you, Laurie and team, for all your hard work in making this group such a success.
Posted by Heather at 11:43 AM