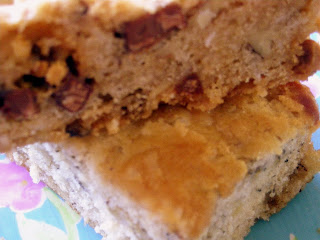 First, the Blondies. Umm....! Chocolate, coconut, butterscotch chips, a combination not to be resisted, plus a chance to make some blondies, which I have not made before.
I halved the recipe and used an 8-inch square pan. Baking time was about 43 minutes. The top has a nice crust on it, quite flaky. Unfortunately quite a few cracks appeared when I flipped the cake onto the second tray; oh well, I think it's going to taste good even though it looks a bit like paving stones.
The recipe is here on Nicole's blog. Thank you, Nicole - it looks like a really good choice.
The Banana Cake was due last Tuesday but I had problems with unripe bananas. This time I had two beautiful, speckled bananas for the cake (also using half the recipe), so here it is. It's an easy cake to get together and I was grateful that I did not have to spend too much time in the kitchen, while NY is reaching record high temperatures and humidity.
This is another 8-inch square cake; I halved Dorie's recipe and baked it for just over 35 minutes. I'm going to keep it simple and just sprinkle some caster sugar over the top - the weather is too hot and sticky to think about frosting.
The recipe is on Kimberley's blog, here. It was an excellent choice.
Posted by Heather at 10:12 AM