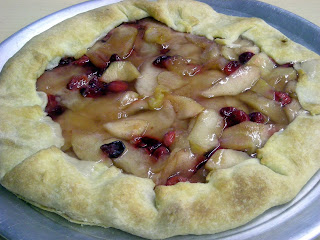 I have never made a galette before; it's a wonderful type of pastry to make - so easy and quite pretty, I think, with its pleated border. I used a pizza pan to bake it on, just rolling the dough over the rolling pin and placing the pastry on the pizza pan by unrolling the dough from the pin. The pan also has a natural 1-1/2 inch border so I used it as a guideline for making the folds.


Cranberries alone are a bit tart for my taste so I chose sliced apples and cranberries in a compote, mixed with sugar, water, honey, about 3/4 tsp. of squeezed of lemon juice, and a dash of cinnamon. I got the idea for the compote from Epicurious.


The dough was nice and easy to roll but stuck awfully on the silpat the first time, so that means using a lot of flour. The galette is in the oven right now. Tomorrow I'll get my taste testers' comments.


Later - it's baked perfectly, except some of the fruit on the very top is a bit dry so I am applying some Dr. Oetker's glaze over the fruit.


The verdict today: fabulous pastry but the fruit mix was not liked. It was too sour and needed more sugar. My next fruit galette will not have cranberries; I think my best recipe for apple filling so far is Chef Bo Friberg's in my November 2 post.


Elizabeth of Celestial Confections chose this week's treat. Here's the link to her blog and the recipe: http://celestialconfections.blogspot.com/. Here's to many more galettes! Thanks Elizabeth.