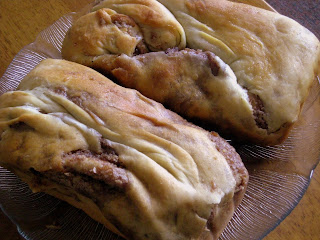 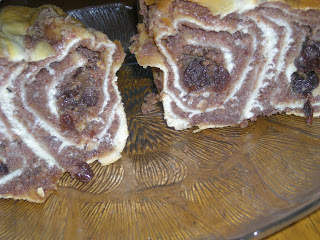 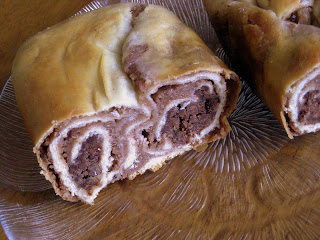 The Daring Baker’s October 2011 challenge was Povitica, hosted by Jenni of The Gingered Whisk. Povitica is a traditional Eastern European Dessert Bread that is as lovely to look at as it is to eat!

I had such a good time with this challenge! And I actually finished it half-way through the month, instead of waiting until the last minute. After much anxiety and wondering if I could meet this challenge I decided to devote the better part of a Saturday and the evening - until almost 11:00pm - solely to Povitica.

Now that this one has turned out quite well, I feel encouraged to do the DB Croissants and the Baklava that I shied away from earlier this year; even to try the Strudel again using the sheet method. I made the half portion - thank you, Audax, it was wonderful to have this option. My first loaf had a band of plumped raisins at the beginning of the dough rectangle (to make it easier to roll); my second loaf had a band of Nestle chocolate mini-morsels at the beginning of the dough. These two flavors should take care of the non-chocolate lovers and the non-raisin lovers at the office as they can choose.

It's an unusual dough, for me at any rate - it seems that European baking has so many fancy dough types. However, it was not terribly difficult; it just took a lot of flouring. Kneading was quite enjoyable, something which I have feared up to now. A good neighbor in my building comes from Eastern Europe, Bosnia to be precise, and she is always making me treats of their marvellous cooking, both sweet and savory. I can't wait to tell her I have made her national bread.

My group swooned over this bread - we enjoyed it for two days as there was some left over after the first day. I would like to try some more flavors now, although my favorite so far is the raisin bread. I will write up the recipe soon, very soon, promise, but I'm just in a bit of a rush mode right now.
Posted by Heather at 5:41 PM