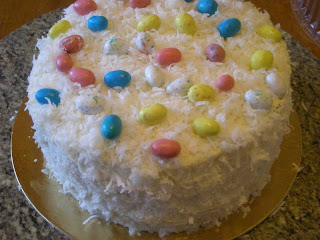 This is an "A" List cake. The coconut crumb of the cake is just right - moist and quite light (it is not necessary to apply any simple syrup) and the 30 minute baking time for 9-inch layers seems just right. I actually baked two sets of 9-inch cake layers then cut three of them into 8-inch layers as I wanted the cake to have a taller, slimmer look than a 9-inch would give. I put the fourth layer in the fridge for use at a later time but ate it all a few days later - I think it's best to freeze extra cake layers to avoid such temptations.

This was my Easter Dinner bring-along for friends on Easter Sunday. It proved to be a perfect dessert, both pretty and delicious. I got the recipe from Carole Walter's "Great Cakes" and also used a Swiss buttercream from her book. I smothered the outside with sweetened, moist coconut dotted with mini-malted Easter eggs. If I get another coconut cake request this is the recipe I will use, except to make more buttercream - the middle layer was a bit sparse on buttercream as the quantity was only meant for two layers.

In small saucepan, scald milk. Add the coconut, cover, and let steep for 30 minutes. Pour milk and coconut into the container of a food processor fitted with steel blade and pulse 8-10 times or until coconut is finely chopped. Transfer to a measuring cup and set aside.

Position rack in lower third of the oven and preheat to 350 degrees Fahrenheit. Cut two round 9-inch layers of parchment paper, one for each pan. Lightly butter parchment paper and spray sides with Bakers' Joy.

Sift together the flour, baking powder, and salt. Set aside.

Cut butter in 1-inch pieces and put them in the large bowl of KitchenAid stand-alone mixer fitted with paddle attachment. Soften on low speed. Increase speed to medium- high. Cream until smooth and light in color, about 1-1/2 to 2 minutes.

Add the sugar, one tablespoon at a time, taking 6 - 8 minutes to blend it in well. Scrape the sides of the bowl occasionally.

Add the eggs, one at a time at 1-minute intervals, scraping the sides of the bowl as necessary.

Reduce mixer speed to low. Add the flour mixture in three additions alternately with coconut/milk mixture in tow additions, starting and ending with the flour. Mix only until incorporated after each addition. Scrape the sides of the bowl and mix for 10 seconds longer.

Spoon the batter into the prepared pans (it is quite thick), smoothing the surfaces with the back of a tablespoon. Bake in the preheated oven on cookie tray for 25-30 minutes or until cake begins to come away from the sides of the pan, is golden brown on top, and is springy to the touch.

Remove from oven. Set the pans on cake racks to cool for 10 minutes. Invert pans onto racks sprayed with Bakers' Joy and remove pan and paper. Frost the cake when it is completely cool.

Assembly tip: Place one layer on plate top side down. Cut four 4-inch strips of waxed paper and slide the strips under the edges of the layer to keep plate clean. Spread the layer with frosting, leaving a 1/2 inch unfrosted border around the edges. Put the second layer top side up on the first. Using a long metal spatula, spread a thin layer of frosting around sides of cake. Use method of dipping spatula in hot water to get frosting to spread more easily. Frost top of cake. Smother in sweetend coconut flakes.

Storage - can keep in cool place under a glass dome. For long storage, cover loosely with an aluminum foil tent and refrigerate. Allow to stand at room temperature, 2-3 hours, before serving.

Place the egg whites in a lg/ bowl of a elevtric mixer and beat with the whisk attachment until the whites are foamy and they begin to thicken (just before the soft peak stage). Set the bowl over a saucepan filled with about 2 inches of simmering water, making sure the bowl is not touching the water. Then, whisk in the sugar by adding 1-2 tablespoon of sugar at a time over a minutes time. Continue beating 2-3 minutes or until the whites are warm (about 120 degrees) and the sugar is dissolved. The mixture should look thick and like whipped marshmallows.
Remove from pan and with either the paddle or whisk attachment, beat the egg whites and sugar on med-high until its a thick, cool meringue – about 5-7 minutes. *Do not overbeat*. Set aside.

Place the butter in a separate clean mixing bowl and, using the paddle attachment, cream the butter at medium speed for 40-60 seconds, or until smooth and creamy. *Do not overbeat or the butter will become toooooo soft.*

On med-low speed, blend the meringue into the butter, about 1-2 Tbsp. at a time, over 1 minute. Add the liqueur and vanilla and mix for 30-45 seconds longer, until thick and creamy.

Wait! My buttercream won’t come together! Reheat the buttercream briefly over simmering water for about 5 seconds, stirring with a wooden spoon. Be careful and do not overbeat. The mixture will look broken with some liquid at the bottom of the bowl. Return the bowl to the mixer and whip on medium speed just until the cream comes back together.

Wait! My buttercream is too soft! Chill the buttercream in the refrigerator for about 10 minutes and rewhip. If that doesn’t work, cream an additional 2-4 Tbsp. of butter in a small bowl– making sure the butter is not as soft as the original amount, so make sure is cool and smooth. On low speed, quickly add the creamed butter to the buttercream, 1 Tbsp. at a time.

Refrigerate in an airtight container for up to 5 days, or can be frozen for up to 6 months. If freezing, store in 2 16-oz. plastic containers and thaw in the refrigerator overnight or at room temperature for several hours.
Posted by Heather at 4:09 AM