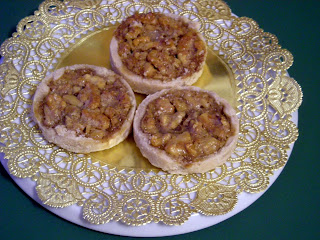 It's Sunday and we have just had a massive snowfall in NYC - wild horses would not drag me out of my apartment and I have run out of pecans. Thank goodness I had bought walnuts a week ago so I have made Walnut Pies instead.

This is the first time I have used pastry rings to make tarts - it's really a lot of fun, I think, but I certainly need practice. The first tarts I made came out way over-filled; for the next batch - the ones in my pic - I removed some of the filling and nuts. A couple of them still oozed syrup out on to the baking sheet but now they are all settled quite nicely, cooling off. It took 7 mins. of baking at 425 degrees F and between 15-20 mins. at 350 degrees F. I'm trying to perfect my tart shapes so that they at least begin to resemble Anita's in Dessert First, but I have a feeling that will take some time. Maybe I should use larger rings - these were 2-1/2 inch rings.

I have done a taste test - they are really very delicious (I did not use the cinnamon, chocolate or coffee but went for a plain walnut mixture). I also tried another dough,the "Perfect Food Processor Pie Crust" from Baking 911; it's very good and easy - I am not too keen on Dorie's "Good for Almost Anything Pie dough"; it just doesn't do it for me, although I do love Dorie's pate sucre recipe and the sour cream puff pastry we used for the apple turnovers.

A nice dollop of whipped cream will be a delicious addition, I am sure. I'll do that on Tuesday.

Beth of Someone's in the Kitchen with Brina picked this week's recipe - I really enjoyed it and learned some new skills. Thank you Beth. The recipe is on her blog.
Posted by Heather at 1:49 PM