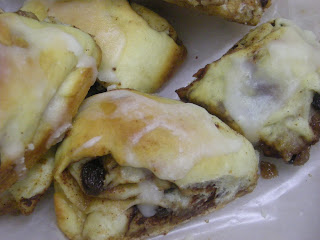 I'm all gung ho on learning to make sweet yeast breads, hence my effort with raisin buns this week. The recipe is from the "Sunmaid Raisins" website. I adapted it slightly and followed Dorie Greenspan's method in making cinnamon bread - to leave the dough out to rise once it has been formed. I can't imagine why one should put it in the fridge for the first rise, which is the instruction from the Sunmaid recipe! They certainly aren't the best looking of raisin buns but they were a wow with my "taste testers" at work. Obviously I must practice forming them into nice roll shapes.
Ingredients
3/8 cup of milk
6 TBS butter
1/4 cup sugar
1/4 teasp. salt
1/4 cup warm water (110 to 115 F)
1 packet yeast
1/2 egg (beat an egg lightly then measure half of beaten egg in liquid measuring cup)
2 cups flour
1/2 cup brown sugar (light), packed
1 TBS cinnamon
1/2 cup raisins
Method
Check if raisins are nice and moist; if not, steam them for one minute and pat dry.
Lightly beat egg then measure to one half of this.
In saucepan, heat milk; stir in 4 TBS. butter, sugar and salt, stirring until butter melts; cool to lukewarm.
In large bowl, combine warm water and yeast; let sit for 3 minutes then stir until dissolved. (Does not matter if not perfectly dissolved but it must be soft.) Add milk mixture, the beaten egg half and 1 cup flour; beat on low speed for a minute or two in stand mixer with paddle attachment until smooth. Stir in remaining cup of flour to make a soft dough.
Cover; let stand in a warm place until twice the volume. Then cover with plastic wrap and place in freezer for 30 mins. to make the dough firm enough to roll.
Grease 9-inch round pan, buttered. On floured surface, roll dough to 18x8-inch rectangle.
Melt remaining 2 TBS. butter; brush over dough.
Sprinkle dough with the brown sugar, cinnamon and raisins. Starting with longest side, roll up jelly-roll fashion. Pinch edges firmly to seal. Cut roll into 12 slices. Place cut side down in greased pan.. Cover; let rise in warm place (80 to 85 F.) until doubled in size, about 45 minutes.
Heat oven to 375 F. Bake for 25 minutes or until light golden.
Glaze:
1/4 cup powdered sugar
1/2 TBS. butter, softened
1 tsp. milk
1/8 tsp. vanilla extract
Combine all glaze ingredients; brush glaze over rolls while they are still warm.