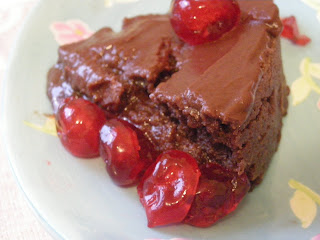 I decided to make Dorie's Prune Armagnac Cake a Rum and Raisin Cake instead. I didn't do the fire trick - I am rather clumsy, so there was a strong possibility I would drop the flaming pan on the floor or something like that. I used some good Dominican Rum, Anejo Gran Reserva Familiar
. I think rum and raisins always go pretty well together. I let the mixture soak for over 24 hours in a ball jar.

Cake's done and I think it's going to be rather a darling. I've had a bit of a bad run lately, what with problems with my starter blog and a couple of recipes falling flat on their faces, so hopefully Dorie's cake will get me out of it.

It was easy to put together and I was pleased to see that it wasn't flourless (am at present very intimidated by flourless). I left it to bake for 30 minutes - it rose quite nicely and there was no heart-sinking collapse when I took it out of the oven. In fact, it has that lovely brownie-type crispy crust on the top and I think I met Dorie's "streaky" criterion okay.

A little hitch, but if it tastes as good as I think it will, I won't care - as I was trying to get it off the springform base a small section at the side cracked. I put the springform ring back on to dam it up and will cover the crack with chocolate frosting. [Next time I use a springform,or cheesecake pan with a removable base, I'll make the parchment lining about 1/4 inch larger in circumference than the base of the pan - that way it will be easy to just take hold of the parchment and gently pull the cake off onto the cooling rack.]

I had to cut and taste it - no more actually waiting for Tuesday. The slice in my pic. is now gobbled, gobbled, gone. It's delicious - the chocolate is just right - not too sweet, nor too bitter. I used the Giaradelli Semi-Sweet and for the frosting a mix of Semi-Sweet and Milk chocolate morsels. The rum and raisins really pack a punch too. It's really like a couture brownie; perhaps on a re-make I would keep it in the oven for a few more minutes; it's a bit soft but that doesn't make it any less delicious.

I want to say a big thank you to LyB of And Then I Do the Dishes. Great choice!
Posted by Heather at 7:30 PM