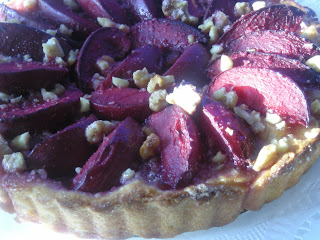 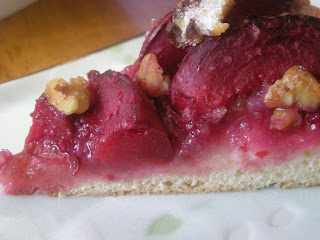 I love brioche, that is Dorie's brioche recipes - before making them I had never tasted this delightful French bread before. I'm interested how this one will turn out as it's not anywhere near as rich as the Brioche Raisin Snails or the Pecan Honey Sticky Buns we made earlier.

This time I halved the quantities and will bake the tart in a 7" tart pan with a removable base. It took a lot longer than 40 mins for the first rise - I don't know how long as I went to bed, but the next morning it was wonderfully puffy. It's in its 30 min.interval slap down mode in the fridge now.

Later - it was a nice satisfying tart to make, from smoothing the dough into the tart pan to sprinkling the sugar and nuts on the fresh ripe plums. Baking was a cinch too and I think it came out looking out rather lovely - just the right size of tart for a bake sale. However, when I did the taste test I found the brioche a little dry so I am rather disappointed; maybe I slapped it around too much. I think if I do this again I will choose cherries rather than plums as I find the plums somewhat overpowering - too large for the tart and with a very assertive flavor ("assertive" - is that something I have picked up on Food Network maybe? I don't think I would have used it to describe a fruit before all the food shows!)

I'm really eager to see how everyone else's turns out and if anyone has similar opinions to mine. All things told, it was great fun to make. Thank you Denise of Chez Us for picking the Brioche Plum Tart.
Posted by Heather at 4:05 AM